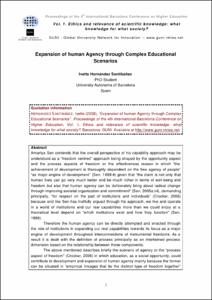 Amartya Sen contends that the overall perspective of his capability approach may be understood as a “freedom centred” approach being shaped by the opportunity aspect and the process aspects of freedom or the effectiveness reason in which “the achievement of development is thoroughly dependent on the free agency of people” “as major engine of development” (Sen, 1999:4) given that “the claim is not only that human lives can go very much better and be much richer in terms of well-being and freedom but also that human agency can be deliberately bring about radical change through improving societal organization and commitment” (Sen, 2005a:vii), demanding principally, “for respect on the part of institutions and individuals” (Crocker, 2006) because and like Sen has fruitfully argued through his approach, we live and operate in a world of institutions and our real capabilities more than we could enjoy at a theoretical level depend on “which institutions exist and how they function” (Sen, 1999).
CitationInternational Barcelona Conference on Higher Education (4th:2008:Barcelona)
URIhttp://hdl.handle.net/2099/5725