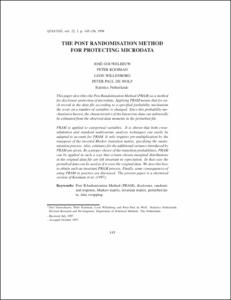 Except where otherwise noted, content on this work is licensed under a Creative Commons license : Attribution-NonCommercial-NoDerivs 2.5 Spain
Abstract
This paper describes the Post Randomisation Method (PRAM) for disclosure protection of microdata. Applying PRAM means that for each record in the data file according to a specified probability mechanism the score on a number of variables is changed. Since this probability mechanism is known, the characteristics of the latent true data can unbiasedly be estimated from the observed data moments in the perturbed file. PRAM is applied to categorical variables. It is shown that both cross-tabulation and standard multivariate analysis techniques can easily be adapted to account for PRAM. It only requires pre-multiplication by the transpose of the inverted Markov transition matrix, specifying the randomisation process. Also, estimates for the additional variance introduced by PRAM are given. By a proper choice of the transition probabilities, PRAM can be applied in such a way that certain chosen marginal distributions in the original file are left invariant in expectation. In that case the perturbed data can be used as if it were the original data. We describe how to obtain such an invariant PRAM process. Finally, some consequences of using PRAM in practice are discussed. The present paper is a shortened version of Kooiman et al. (1997).
CitationGouweleeuw, José; Kooiman, Peter; Willenborg, Leon; De Wolf, Paul P. "The post randomisation method for protecting microdata". Qüestiió. 1998, vol.22, núm.1
URIhttp://hdl.handle.net/2099/4650
ISSN0210-8054 (versió paper)
Collections
Share: