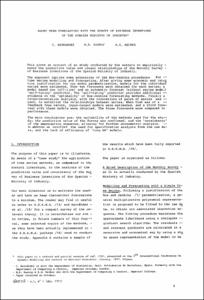 Show full item record
Hernández Iglesias, Cesáreo
Zarrop, Martin B.
Becker, R.G.
Document typeArticle
PublisherUniversitat Politècnica de Barcelona. Centre de Càlcul
Rights accessOpen Access
Abstract
This gives an account of an study conducted by the authors to empirically asses the predictive value and causal relationships of the Monthly Survey of Business Intentions of the Spanish Ministry of Industry. The approach implies some extensions of the BoxJenkins procedures for time series modelling and forecasting. After giving some economic and intuitive justification for our model parametrization, models for the individual series were'estimated. Then two forecasts were obtained for each series: a model based one (offline) and an automatic forecast (with out series model) 'selftuning' predictor. The 'selftuning' predictor provides additional evidence on the 'optimality' of BoxJenkins forecasting methods. Finally a crosscorrelation analysis, with the innovations of pairs of series was used, to establish the relationships between series. When that was óf a feedback free nature, inputoutput models were estimated, and a thir forecast with these models were obtained. The three forecasts were compared in performance. The main conclusions are: the suitability of the methods used for the study¡ the predic tive value of the Surbey was confirmed, and the 'consistency' of the empresarios answeres, allowing for further econometric analysis. In addition we ferified the need for specification analysis from the raw data, and the lack of efficiency of 'long AR' models.
URIhttp://hdl.handle.net/2099/4315
ISSN0210-8054 (versió paper)
Collections
Share: