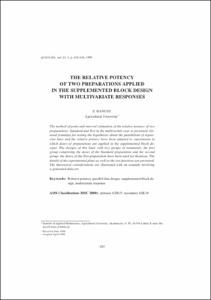 Show full item record
Hanusz, Z.
Document typeArticle
PublisherInstitut d'Estadística de Catalunya
Rights accessOpen Access
Abstract
The method of point and interval estimation of the relative potency of two preparations: Standard and Test in the multivariate case is presented. General formulae for testing the hypotheses about the parallelism of regression lines and the relative potency have been adopted to experiments in which doses of preparations are applied in the supplemented block designs. The designs of this kind, with two groups of treatments, the first group comprising the doses of the Standard preparation and the second group the doses of the Test preparation have been used for bioassay. The details of the experimental plans as well as the test functions are presented. The theoretical considerations are illustrated with an example involving a generated data set.
CitationHanusz, Z. "The relative potency of two preparations applied in the supplemented block design with multivariate responses". Qüestiió. 1999, vol. 23, núm. 3
URIhttp://hdl.handle.net/2099/4124
ISSN0210-8054 (versió paper)
Collections
Share: