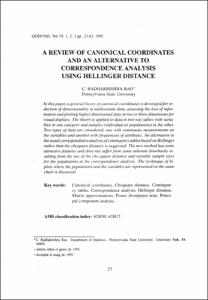 Except where otherwise noted, content on this work is licensed under a Creative Commons license : Attribution-NonCommercial-NoDerivs 2.5 Spain
Abstract
In this paper a general theory of canonical coordinates is developed for reduction of dimensionality in multivariate data, assessing the loss of information and plotting higher dimensional data in two or three dimensions for visual displays. The theory is applied to data in two way tables with variables in one category and samples (individual or populations) in the other. Two types of data are considered, one with continuous measurements on the variables and another with frequencies of attributes. An alternative to the usual correspondence analysis of contingency tables based on the Hellinger rather than the chi-square distance is suggested. The new method has some attractive features and does not suffer from some inherent drawbacks resulting from the use of the chi-square distance and variable sample sizes for the populations in the correspondence analysis. The technique of biplots where the populations and the variables are represented on the same chart is discussed.
CitationRao, C. Radhakrishna. "A review of canonical coordinates and an alternative to correspondence analysis using Hellinger distance". Qüestiió. 1995, vol. 19, núm. 1-3.
URIhttp://hdl.handle.net/2099/4059
ISSN0210-8054 (versió paper)
Collections
Share: