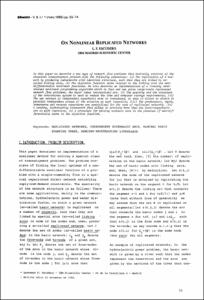 In this paper we describe a new type of network flow problem that basically consists of the classical transshipment problem with the following extensions: (1) The replication of a network by producing subnetworks with identical structure, such that they are linked by so-called linking arcs; (2) The objective function terms related to the linking arcs are nondifferentiable nonlinear functions. We also describe an implementation of a linearly constrained nonlinear programming algorithm which is fast and can solve large-scale replicated network flow problems; the major ideas incorporated are: (i) The sparsity and the structure of the constraints system is used to reduce the time and computer storage requirements; (ii) The new concept of independent superbasic sets is introduced, so that it allows to obtain in parallel independent pieces of the solution at each iteration; (iii) The predecessor, depth, transverse and reverse structures are specialized for the case of replicated networks; (iv) A bending, backtracking linesearch that allows to activate more than one basic-superbasic arc at each iteration; (v) A procedure for pricing nonbasic arcs in the presence of non-differentiable terms in the objective function.
URIhttp://hdl.handle.net/2099/3919
ISSN0210-8054 (versió paper)