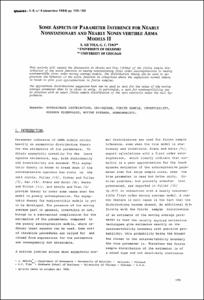 This article will extend the discussion in Ahtola and Tiao (1984a) of the finite sample distribution of the score function in nearly nonstationary first order autoregressions to nearly noninvertible first order moving average models. This distribution theory can be used to appreciate the behavior of the score function in situations where the asymptotic normal theory is known to give poor approximations in finite samples. The approximate distributions suggested here can be used to test for the value of the moving average parameter when it is close to unity. In particular, a test for noninvertibility can be obtained with an exact finite sample distribution of the test statistic under the null hypothesis.
URIhttp://hdl.handle.net/2099/3918
ISSN0210-8054 (versió paper)