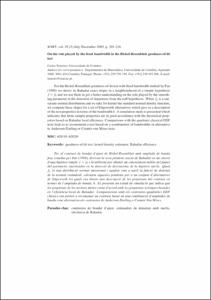 HolaFor the Bickel-Rosenblatt goodness-of-fit test with fixed bandwidth studied by Fan (1998) we derive its Bahadur exact slopes in a neighbourhood of a simple hypothesis f = f0 and we use them to get a better understanding on the role played by the smoothing parameter in the detection of departures from the null hypothesis. When f0 is a univariate normal distribution and we take for kernel the standard normal density function, we compute these slopes for a set of Edgeworth alternatives which give us a description of the test properties in terms of the bandwidth h. A simulation study is presented which indicates that finite sample properties are in good accordance with the theoretical properties based on Bahadur local efficiency. Comparisons with the quadratic classical EDF tests lead us to recommend a test based on a combination of bandwidths in alternative to Anderson-Darling or Cram´er-von Mises tests.
CitationTenreiro, Carlos. "On the role played by the fixed bandwidth in the Bickel-Rosenblatt goodness-of-fit test". SORT, 2005, Vol. 29, núm. 2
URIhttp://hdl.handle.net/2099/3766
ISSN1696-2281