Asymptotic study of canonical correlation analysis: from matrix and analytic approach to operator and tensor approach 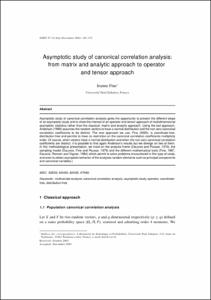 Except where otherwise noted, content on this work is licensed under a Creative Commons license : Attribution-NonCommercial-NoDerivs 2.5 Spain
Abstract
Asymptotic study of canonical correlation analysis gives the opportunity to present the different steps of an asymptotic study and to show the interest of an operator and tensor approach of multidimensional asymptotic statistics rather than the classical, matrix and analytic approach. Using the last approach, Anderson (1999) assumes the random vectors to have a normal distribution and the non zero canonical correlation coefficients to be distinct. The new approach we use, Fine (2000), is coordinate-free,distribution-free and permits to have no restriction on the canonical correlation coefficients multiplicity order. Of course, when vectors have a normal distribution and when the non zero canonical correlation coefficients are distinct, it is possible to find again Anderson’s results but we diverge on two of them. In this methodological presentation, we insist on the analysis frame (Dauxois and Pousse, 1976), the sampling model (Dauxois, Fine and Pousse, 1979) and the different mathematical tools (Fine, 1987, Dauxois, Romain and Viguier, 1994) which permit to solve problems encountered in this type of study, and even to obtain asymptotic behavior of the analyses random elements such as principal components and canonical variables.)
CitationFine, Jeanne. "Asymptotic study of canonical correlation analysis: from matrix and analytic approach to operator and tensor approach". SORT, 2003, Vol. 27, núm. 2
URIhttp://hdl.handle.net/2099/3737
ISSN1696-2281
Collections
Share: