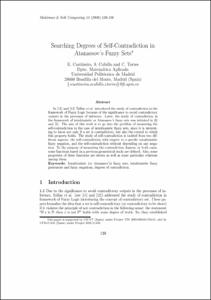 Except where otherwise noted, content on this work is licensed under a Creative Commons license : Attribution-NonCommercial-NoDerivs 3.0 Spain
Abstract
In [11] and [12] Trillas et al. introduced the study of contradiction in the framework of Fuzzy Logic because of the significance to avoid contradictory outputs in the processes of inference. Later, the study of contradiction in the framework of intuitionistic or Atanassov s fuzzy sets was initiated in [6] and [5]. The aim of this work is to go into the problem of measuring the self-contradiction in the case of intuitionistc fuzzy sets, since it is interesting to know not only if a set is contradictory, but also the extend to which this property holds. The study of self-contradiction is tackled from two different aspects: the self-contradiction with respect to a specific intuitionistic fuzzy negation, and the self-contradition without depending on any negation. To the purpose of measuring the contradiction degrees, in both cases, some functions based on a previous geometrical study are defined. Also, some properties of these functions are shown as well as some particular relations among them.
URIhttp://hdl.handle.net/2099/3658
ISSN1134-5632
Collections
Share: