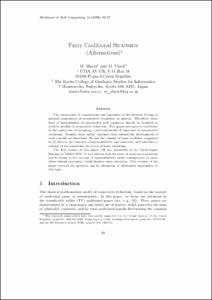 Show full item record
Mareš, Milan
Vlach, Milan
Document typeArticle
PublisherUniversitat Politècnica de Catalunya. Secció de Matemàtiques i Informàtica
Rights accessOpen Access
Abstract
The uncertainty of expectations and vagueness of the interests belong to natural components of cooperative situations, in general. Therefore, some kind of formalization of uncertainty and vagueness should be included in realistic models of cooperative behaviour. This paper attempts to contribute to the endeavour of designing a universal model of vagueness in cooperative situations. Namely, some initial auxiliary steps toward the development of such a model are described. We use the concept of fuzzy coalitions suggested in [1], discuss the concepts of superadditivity and convexity, and introduce a concept of the coalitional structure of fuzzy coalitions. The first version of this paper [10] was presented at the Czech-Japan Seminar in Valtice 2003. It was obvious that the roots of some open questions can be found in the concept of superadditivity (with consequences on some other related concepts), which deserve more attention. This version of the paper extends the previous one by discussion of alternative approaches to this topic.
URIhttp://hdl.handle.net/2099/3656
Collections
Share: