A reflection on what is a membership function 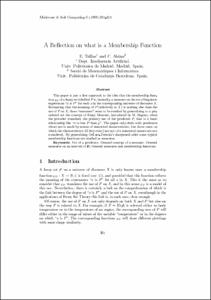 This paper is just a first approach to the idea that the membership function $\mu _{P}$ of a fuzzy set labelled $P$ is, basically, a measure on the set of linguistic expressions ``$x$ is $P"$ for each $x$ in the corresponding universe of discourse $X.$ Estimating that the meaning of $P$ (relatively to $X)$ is nothing else than the use of $P$ on $X,$ these ``measures'' seem to be reached by generalizing to a preordered set the concept of Fuzzy Measure, introduced by M. Sugeno, when the preorder translates the primary use of the predicate $P,$ that is a basic relationship like ``$x$ is less $P$ than $y".$ The paper only deals with predicates whose use is made by means of numerical characteristics, but those cases on which the characteristics (if they exist) are not of a numerical nature are not considered. By generalizing DeLuca-Termini's sharpened order some typical membership functions are studied as measures
URIhttp://hdl.handle.net/2099/3554
ISSN1134-5632