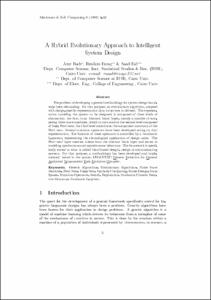 Except where otherwise noted, content on this work is licensed under a Creative Commons license : Attribution-NonCommercial-NoDerivs 3.0 Spain
Abstract
The problem of developing a general methodology for system design has always been demanding. For this purpose, an evolutionary algorithm, adapted with design-specific representation data structures is devised. The representation modeling the system to be designed, is composed of three levels of abstraction: the first, is an 'abstract brain' layer- mainly a number of competing finite state machines, which in turn control the second level composed of fuzzy Petri nets; the third level constitutes the component automata of the Petri nets. Several mutation operators have been developed acting on that representation. The function of these operators is controlled by a 'stochastic L-system'- representing the chronological application of design tasks. The Petri nets' layer receives tokens from the abstract brain layer and serves in modeling synchronous and asynchronous behaviour. The framework is specifically suited to what is called 'distributed design'- design of communicating systems. For that purpose, a methodology has been developed and implemented/ tested in the system GIGANTEC: Genetic Induction for General Analytical Non-numeric Task Evolution Compiler.
URIhttp://hdl.handle.net/2099/3541
ISSN1134-5632
Collections
Share: