Hierarchical decomposition of fuzzy controllers based on meta-knowledge 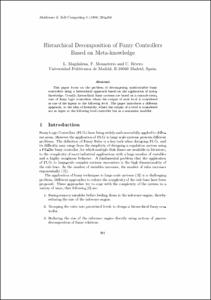 This paper focus on the problem of decomposing multivariable fuzzy controllers using a hierarchical approach based on the application of meta-knowledge. Usually, hierarchical fuzzy systems are based on a cascade structure of fuzzy logic controllers where the output of each level is considered as one of the inputs to the following level. The paper introduces a different approach, to the idea of hierarchy, where the output of a level is considered not as input to the following level controller but as a semantics modifier.
URIhttp://hdl.handle.net/2099/3532
ISSN1134-5632