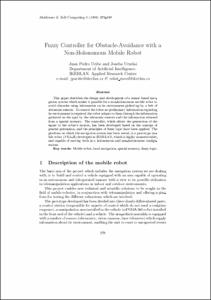 Except where otherwise noted, content on this work is licensed under a Creative Commons license : Attribution-NonCommercial-NoDerivs 3.0 Spain
Abstract
This paper describes the design and development of a sensor based navigation system which makes it possible for a non-holonomous mobile robot to avoid obstacles using information on its environment picked up by a belt of ultrasonic sensors. To control the robot no preliminary information regarding its environment is required, the robot adapts to them through the information gathered on the spot by the ultrasonic sensors and the information released from a spatial memory. The controller, which allows the generation of the signal to the robot's motors, has been developed based on the concept of general perception, and the principles of fuzzy logic have been applied. The platform on which the navigation system has been tested, is a prototype mobile robot (VEA-II) developed at IKERLAN, which is highly manoeuvrable, and capable of moving both in a holonomous and non-holonomous configurations.
URIhttp://hdl.handle.net/2099/3531
ISSN1134-5632
Collections
Share: