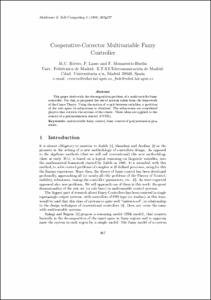 This paper deals with the decomposition problem of a multivariable fuzzy controller. For this, is proposed the use of notions taken from the framework of the Game Theory. Using the notion of {\it couple} between variables, a partition of the rule space in subsystems is obtained. The subsystems are considered players that corrects the actions of the others. These ideas are applied to the control of a polymerization reactor (CSTR).
URIhttp://hdl.handle.net/2099/3530
ISSN1134-5632