Using fuzzy similiarity relations to revise and update a knwoledge base 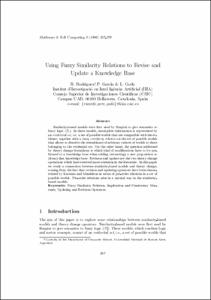 Show full item record
Rodríguez, Ricardo Óscar
Garcia, Pere
Godo Lacasa, Lluís
Document typeArticle
PublisherUniversitat Politècnica de Catalunya. Secció de Matemàtiques i Informàtica
Rights accessOpen Access
Abstract
Similarity-based models were first used by Ruspini to give semantics to fuzzy logic ([7]). In these models, incomplete information is represented by an evidential set, i.e. a set of possible worlds that are compatible with the evidence, together with a fuzzy similarity relation on the set of possible worlds that allows to describe the resemblance of arbitrary subsets of worlds to those belonging to the evidencial set. On the other hand, the question addressed by theory change formalisms is which kind of modifications have to be performed to a knowledge base when adding (retracting) a new proposition to (from) that knowledge base. Revision and update are the two theory change operations which have received more attention in the literature. In this paper we study a connection between similarity-based models and theory change, coming from the fact that revision and updating operators have been characterized by Katsuno and Mendelson in terms of pre-order relations in a set of possible worlds. Pre-order relations arise in a natural way in the similarity-based models.
URIhttp://hdl.handle.net/2099/3474
ISSN1134-5632
Collections
Share: