On a new class of distances between fuzzy numbers 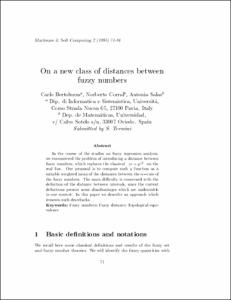 Except where otherwise noted, content on this work is licensed under a Creative Commons license : Attribution-NonCommercial-NoDerivs 3.0 Spain
Abstract
In the course of the studies on fuzzy regression analysis, we encountered the problem of introducing a distance between fuzzy numbers, which replaces the classical (x-y)² on the real line. Our proposal is to compute such a function as a suitable weighted mean of the distances between the \ac s of the fuzzy numbers. The main difficulty is concerned with the definition of the distance between intervals, since the current definitions present some disadvantages which are undesirable in our context. In this paper we describe an approach which removes such drawbacks.
URIhttp://hdl.handle.net/2099/2462
ISSN1134-5632
Collections
Share: