Between logic and probability 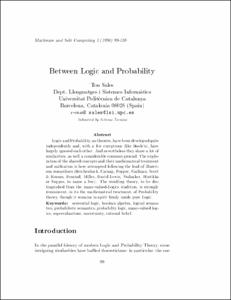 Except where otherwise noted, content on this work is licensed under a Creative Commons license : Attribution-NonCommercial-NoDerivs 3.0 Spain
Abstract
Logic and Probability, as theories, have been developed quite independently and, with a few exceptions (like Boole's), have largely ignored each other. And nevertheless they share a lot of similarities, as well a considerable common ground. The exploration of the shared concepts and their mathematical treatment and unification is here attempted following the lead of illustrious researchers (Reichenbach, Carnap, Popper, Gaifman, Scott & Krauss, Fenstad, Miller, David Lewis, Stalnaker, Hintikka or Suppes, to name a few). The resulting theory, to be distinguished from the many-valued-Logics tradition, is strongly reminiscent, in its the mathematical treatment, of Probability theory, though it remains in spirit firmly inside pure Logic.
URIhttp://hdl.handle.net/2099/2439
ISSN1134-5632
Collections
Share: