Completing an uncertainty criterion of classification 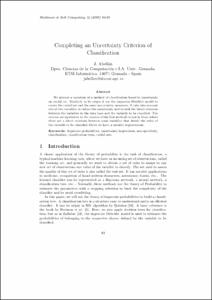 Except where otherwise noted, content on this work is licensed under a Creative Commons license : Attribution-NonCommercial-NoDerivs 3.0 Spain
Abstract
We present a variation of a method of classification based in uncertainty on credal set. Similarly to its origin it use the imprecise Dirichlet model to create the credal set and the same uncertainty measures. It take into account sets of two variables to reduce the uncertainty and to seek the direct relations between the variables in the data base and the variable to be classified. The success are equivalent to the success of the first method except in those where there are a direct relations between some variables that decide the value of the variable to be classified where we have a notable improvement.
URIhttp://hdl.handle.net/2099/1824
ISSN1134-5632
Collections
Share: