Segmenting colour images on the basis of a fuzzy hierarchical approach 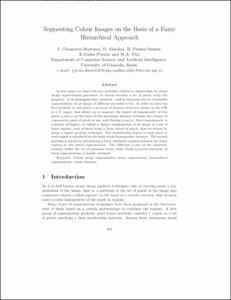 Except where otherwise noted, content on this work is licensed under a Creative Commons license : Attribution-NonCommercial-NoDerivs 3.0 Spain
Abstract
In this paper we deal with two problems related to imprecision in colour image segmentation processes: to decide whether a set of pixels verify the property "to be homogeneously coloured", and to represent the set of possible segmentations of an image at different precision levels. In order to solve the first problem we introduce a measure of distance between colours in the CIE L*a*b* space, that allows us to measure the degree of homogeneity of two pixels p and q on the basis of the maximum distance between the colours of consecutive pairs of pixels in any path linking p and q . Since homogeneity is a matter of degree, we define a (fuzzy) segmentation of an image as a set of fuzzy regions, each of them being a fuzzy subset of pixels, that we obtain by using a region growing technique. The membership degree of each pixel to each region is calculated on the basis of our homogeneity measure. The second problem is solved by introducing a fuzzy similarity relation between the fuzzy regions in this initial segmentation. The different α-cuts of the similarity relation define the set of precision levels, from which a nested hierarchy of fuzzy segmentations is finally obtained.
URIhttp://hdl.handle.net/2099/1740
ISSN1134-5632
Collections
Share: