Parallel programming issues and what the compiler can do to help 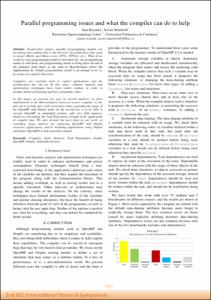 Document typeConference report
PublisherBarcelona Supercomputing Center
Rights accessOpen Access
Abstract
Twenty-first century parallel programming models are becoming real complex due to the diversity of architectures they need to target (Multi- and Many-cores, GPUs, FPGAs, etc.). What if we could use one programming model to rule them all, one programming model to find them, one programming model to bring them all and in the darkness bind them, in the land of MareNostrum where the Applications lie. OmpSs programming model is an attempt to do so, by means of compiler directives. Compilers are essential tools to exploit applications and the architectures the run on. In this sense, compiler analysis and optimization techniques have been widely studied, in order to produce better performing and less consuming codes. In this paper we present two uses of several analyses we have implemented in the Mercurium[3] source-to-source compiler: a) the first use is to help users with correctness hints regarding the usage of the OpenMP and OmpSs tasks; b) the second use is to be able to execute OpenMP in embedded systems, with very little memory, thanks to calculating the Task Dependency Graph of the application at compile time. We also present the next steps of our work: a) extending range analysis for analyzing OpenMP and OmpSs recursive applications, and b) modeling applications using OmpSs and future OpenMP4.1 tasks priorities feature.
CitationRoyuela, Sara; Martorell Bofill, Xavier. Parallel programming issues and what the compiler can do to help. A: "BSC Doctoral Symposium (2nd: 2015: Barcelona)". 2nd ed. Barcelona: Barcelona Supercomputing Center, 2015, p. 112-113.
URIhttp://hdl.handle.net/2099/16570
Collections
Share: