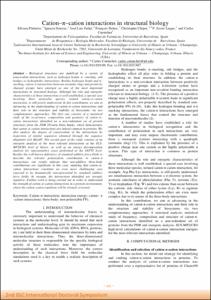 Show full item record
Pinheiro, Silvana
Soteras, Ignacio
Gelpí, Josep Lluís
Dehez, François
Chipot, Christophe
Luque, F. Javier
Curutchet, Carles
Document typeConference report
PublisherBarcelona Supercomputing Center
Rights accessOpen Access
Abstract
Biological structures are stabilized by a variety of noncovalent interactions, such as hydrogen bonds, π –stacking, salt bridges or hydrophobic interactions. Besides hydrogen bonds and π– stacking, cation–π interactions between aromatic rings and positively charged groups have emerged as one of the most important interactions in structural biology. Although the role and energetic characteristics of these interactions is well established, a special case involving three molecular species, termed cation–π–cation interaction, is still poorly understood. In this contribution, we aim at advancing in the understanding of cation–π–cation interactions and their role in the structure and stability of biosystems via two complementary approaches. The first one consists of a statistical study of the occurrence, composition and geometry of cation–π– cation interactions identified on a non-redundant set of protein structures from the PDB (Protein Data Bank), which demonstrates that cation–π–cation interactions are indeed common in proteins. We also analyze the degree of conservation of the interactions by inspection of similar sequences obtained through the sequence alignment tool BLAST. The second part of the study consists of an energetic analysis of the most relevant interactions at the SCSMP2/ CBS level of theory, as well as an energy decomposition analysis for representative cases performed at the SAPT2 level. Besides the well-known deficiency of standard additive force fields to describe the relevant polarization contribution to cation–π interactions, our results indicate that non-additive three-body contributions are significant in this case, implying that cation–π– cation interactions constitute an even more challenging case expected to be dramatically misrepresented by standard additive force fields. In vacuum, the interactions identified are strongly repulsive. Further work is being carried out in order to understand the strength of cation–π–cation interactions in a protein environment, where the cation–cation repulsion will be strongly screened.
CitationPinheiro, Silvana [et al.]. Cation–π–cation interactions in structural biology. A: "BSC Doctoral Symposium (2nd: 2015: Barcelona)". 2nd ed. Barcelona: Barcelona Supercomputing Center, 2015, p. 103-105.
URIhttp://hdl.handle.net/2099/16566
Collections
Share: