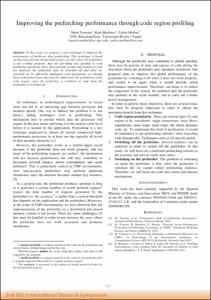 In this work, we propose a new technique to improve the performance of hardware data prefetching. This technique is based on detecting periods of time and regions of code where the prefetcher is not working properly, thus not providing any speedup or even producing slowdown. Once these periods of time and regions of code are detected, the prefetcher may be switched off and later on, switched on. To efficiently implement such mechanism, we identify three orthogonal issues that must be addressed: the granularity of the code region, when the prefetcher is switched on, and when the prefetcher is switched off.
CitationTorrents Lapuerta, Martí; Martínez, Raul; Molina Clemente, Carlos. Improving the prefetching performance through code region profiling. A: "BSC Doctoral Symposium (2nd: 2015: Barcelona)". 2nd ed. Barcelona: Barcelona Supercomputing Center, 2015, p. 90.
URIhttp://hdl.handle.net/2099/16559