Macroscopic structures generated by microorganisms swimming in a fluid 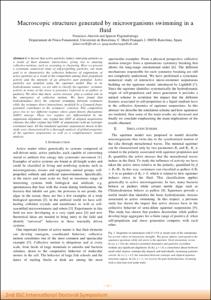 It is known that active particles induce emerging patterns as a result of their dynamic interactions, giving rise to amazing collective motions, such as swarming or clustering. Here we present a systematic numerical study of self-propelling particles; our main goal is to characterize the collective behavior of suspensions of active particles as a result of the competition among their propulsion activity and the intensity of an attractive pair potential. Active particles are modeled using the squirmer model. Due to its hydrodynamic nature, we are able to classify the squirmer swimmer activity in terms of the stress it generates (referred to as pullers or pushers). We show that these active stresses play a central role in the emergence of collective motion. We have found that hydrodynamics drive the coherent swimming between swimmers while the swimmer direct interactions, modeled by a Lennard-Jones potential, contributes to the swimmers’ cohesion. This competition gives rise to two different regimes where giant density fluctuations (GDF) emerge. These two regimes are differentiated by the suspension alignment; one regime has GDF in aligned suspensions whereas the other regime has GDF of suspensions with an isotropic orientated state. All the simulated squirmer suspensions shown in this study were characterized by a thorough analysis of global properties of the squirmer suspensions as well as a complementary cluster analysis.
CitationAlarcón, Francisco; Pagonabarraga, Ignacio. Macroscopic structures generated by microorganisms swimming in a fluid. A: "BSC Doctoral Symposium (2nd: 2015: Barcelona)". 2nd ed. Barcelona: Barcelona Supercomputing Center, 2015, p. 77-78.
URIhttp://hdl.handle.net/2099/16553