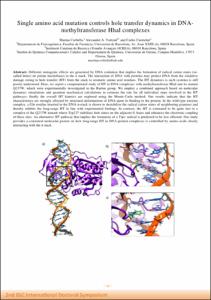 Show full item record
Corbella, Marina
Voityuk, Alexander A.
Curutchet, Carles
Document typeConference report
PublisherBarcelona Supercomputing Center
Rights accessOpen Access
Abstract
Different mutagenic effects are generated by DNA oxidation that implies the formation of radical cation states (socalled holes) on purine nucleobases in the π stack. The interaction of DNA with proteins may protect DNA from the oxidative damage owing to hole transfer (HT) from the stack to aromatic amino acid residues. The HT dynamics is such systems is still poorly understood. Here, we report a computational study of HT in DNA complexes with methyltransferase HhaI and its mutant Q237W, which were experimentally investigated in the Barton group. We employ a combined approach based on molecular dynamics simulations and quantum mechanical calculations to estimate the rate for all individual steps involved in the HT pathways; finally the overall HT kinetics are explored using the Monte-Carlo method. Our results indicate that the HT characteristics are strongly affected by structural deformations of DNA upon its binding to the protein. In the wild-type enzyme complex, a Gln residue inserted in the DNA π-stack is shown to destabilize the radical cation states of neighboring guanines and thereby inhibits the long-range HT in line with experimental findings. In contrast, the HT is estimated to be quite fast in a complex of the Q237W mutant where Trp237 stabilizes hole states on the adjacent G bases and enhances the electronic coupling of these sites. An alternative HT pathway that implies the formation of a Trp+ radical is predicted to be less efficient. Our study provides a consistent molecular picture on how long-range HT in DNA-protein complexes is controlled by amino acids closely interacting with the π stack.
CitationCorbella, Marina; Voityuk, Alexander A.; Curutchet, Carles. Single amino acid mutation controls hole transfer dynamics in DNAmethyltransferase HhaI complexes. A: "BSC Doctoral Symposium (2nd: 2015: Barcelona)". 2nd ed. Barcelona: Barcelona Supercomputing Center, 2015, p. 76.
URIhttp://hdl.handle.net/2099/16544
Collections
Share: