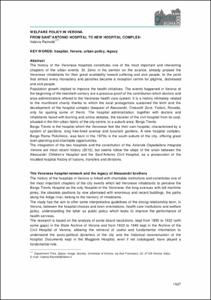 Except where otherwise noted, content on this work is licensed under a Creative Commons license : Attribution-NonCommercial-NoDerivs 3.0 Spain
Abstract
The history of the Veronese hospitals constitutes one of the most important and interesting chapters of the urban events. St. Zeno in his sermon on the avarice, already praised the Veronese inhabitants for their great availability toward suffering and sick people, to the point that almost every monastery and parishes became a reception centre for pilgrims, distressed and sick people. Population growth implied to improve the health initiatives. The events happened in Verona at the beginning of the twentieth century are a precious proof of the contribution which doctors and wise administrators offered to the Veronese health care system. It is a history intimately related to the munificent charity thanks to which the local protagonists sustained the birth and the development of the hospital complex (bequest of Alessandri, Cressotti Zorzi, Failoni, Roveda, only for quoting some of them). The hospital administration, together with doctors and inhabitants faced with burning and active debates, the transfer of the civil hospital from its seat, situated in the thin urban fabric of the city centre, to a suburb area: Borgo Trento. Borgo Trento is the hospital which the Veronese feel like their own hospital, characterized by a system of pavilions, long tree-lined avenue and luxuriant gardens. A new hospital complex, Borgo Roma Policlinico, was born in the 1970s in the south suburb of the city, offering great town planning and charitable opportunities. The integration of the two hospitals and the constitution of the Azienda Ospedaliera Integrata Verona are most recent history (2010), but seems follow the steps of the union between the Alessandri Children’s Hospital and the Sant’Antonio Civil Hospital, as a prosecution of the troubled hospital history of fusions, transfers and divisions.
CitationRainoldi, Valeria. Welfare policy in Verona: from Sant’Antonio hospital to New hospital complex. A: International Conference Virtual City and Territory. "9° Congresso Città e Territorio Virtuale, Roma, 2, 3 e 4 ottobre 2013". Roma: Università degli Studi Roma Tre, 2014, p. 1527-1535.
URIhttp://hdl.handle.net/2099/16471
DOI10.5821/ctv.7989
ISBN978-88-97524-15-1
Collections
Share: