Mina: the city of tents origination and development 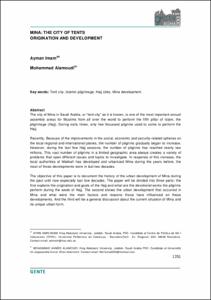 Show full item record
Imam, Ayman
Alamoudi, Mohammad
Document typeConference report
PublisherUniversità degli Studi Roma Tre
Centre de Política de Sòl i Valoracions
Rights accessOpen Access
Abstract
The city of Mina in Saudi Arabia, or “tent city” as it is known, is one of the most important annual assembly areas for Muslims from all over the world to perform the fifth pillar of Islam, the pilgrimage (Hajj). During early times, only few thousand pilgrims used to come to perform the Hajj. Recently, Because of the improvements in the social, economic and security-related spheres on the local regional and international planes, the number of pilgrims gradually began to increase. However, during the last few Hajj seasons, the number of pilgrims has reached nearly two millions. This vast number of pilgrims in a limited geographic area always creates a variety of problems that open different issues and topics to investigate. In response of this increase, the local authorities of Makkah has developed and urbanized Mina during the years before, the most of those developments were in last two decades. The objective of this paper is to document the history of the urban development of Mina during the past until now especially last tow decades. The paper will be divided into three parts: the first explains the origination and goals of the Hajj and what are the devotional works the pilgrims perform during the week of Hajj. The second shows the urban development that occurred in Mina and what were the main factors and reasons those have influenced on these developments. And the third will be a general discussion about the current situation of Mina and its unique urban form.
CitationImam, Ayman; Alamoudi, Mohammad. Mina: the city of tents origination and development. A: International Conference Virtual City and Territory. "9° Congresso Città e Territorio Virtuale, Roma, 2, 3 e 4 ottobre 2013". Roma: Università degli Studi Roma Tre, 2014, p. 1351-1365.
URIhttp://hdl.handle.net/2099/16459
DOI10.5821/ctv.8014
ISBN978-88-97524-15-1
Collections
Share: