Christian sacred heritage of the middle east : understanding the context 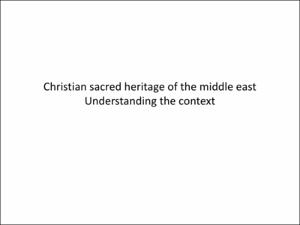 The Christian sacred heritage in the middle-east has been shaped by -and thus constitutes the best witness to- two main historical factors: - Rites: The maturation of the doctrine within the church (in its various branches) - Politics: The relation of the church with local powers, as well as the western foreign policies in the region Throughout this presentation we will conduct sections through critical points of history, where we try to examine the sacred heritage through the lens of spirituality and politics. We selected three distant, yet comparable, historical peaks that played a major role in determining the sacred heritage of the region: - The Conversion of the roman empire (looking towards the persecutions in the empire from one side, and the Muslim conquests from the other side) - The crusade wars (looking towards the Christians under the Muslim rule from one side, and towards the post crusade reactions from the other side) - The end of the first world war and the fall of the Ottoman empire (looking towards the decline of the ottoman empire from one side, to modern day persecutions) By examining the three periods through their sacred heritage, our aim is to shed light on a thread that directly relates to our present. Our presentation will mainly focus on Lebanon, Syria and Iraq.
CitationBou Nassif, Marc-Antoine. Christian sacred heritage of the middle east : understanding the context. A: XXXVIIè Curset jornades internacionals sobre la intervenció en el patrimoni arquitectònic. "Patrimoni sacre: permanent innovació". Barcelona: AADIPA; COAC, 2014, p. 1-92.
URIhttp://hdl.handle.net/2099/16438