Mapping the realms of the soldiers: cartographies of military landscapes in Skopje and Bitola 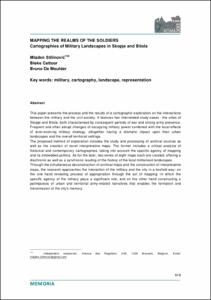 This paper presents the process and the results of a cartographic exploration on the interactions between the military and the civil society. It features two interrelated study-cases : the cities of Skopje and Bitola, both characterised by consequent periods of war and strong army presence. Frequent and often abrupt changes of occupying military power combined with the local effects of ever-evolving military strategy, altogether having a dramatic impact upon their urban landscapes and the overall territorial settings. The proposed method of exploration includes the study and processing of archival sources as well as the creation of novel interpretative maps. The former includes a critical analysis of historical and contemporary cartographies, taking into account the specific agency of mapping and its embedded politics. As for the later, two series of eight maps each are created, offering a diachronic as well as a synchronic reading of the history of the local militarised landscapes. Through the simultaneous deconstruction of archival maps and the construction of interpretative maps, the research approaches the interaction of the military and the city in a twofold way: on the one hand revealing process of appropriation through the act of mapping -in which the specific agency of the military plays a significant role, and on the other hand constructing a palimpsests of urban and territorial army-related narratives that enables the formation and transmission of the city's memory.
CitationStilinović, Mladen; Cattoor, Bieke; De Meulder, Bruno. Mapping the realms of the soldiers: cartographies of military landscapes in Skopje and Bitola. A: International Conference Virtual City and Territory. "9° Congresso Città e Territorio Virtuale, Roma, 2, 3 e 4 ottobre 2013". Roma: Università degli Studi Roma Tre, 2014, p. 919-929.
URIhttp://hdl.handle.net/2099/16387
ISBN978-88-97524-15-1