Community and space : the interpretation of a community space located at an ancient sacral place 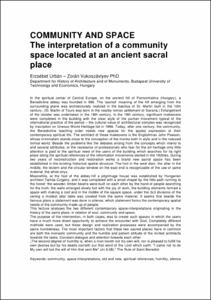 Show full item record
Zorán, Vukoszávlyev
Erzsébet, Urbán
Document typeConference lecture
PublisherAADIPA; COAC
Rights accessOpen Access
Abstract
In the spiritual center of Central Europe, on the ancient hill of Pannonhalma (Hungary), a Benedictine abbey was founded in 996. The ‘sacred’ meaning of the hill emerging from the surrounding plane was architecturally realized in the basilica of St. Martin built in the 13th century. (St. Martin of Tours was born in the nearby roman settlement of Savaria.) Enlargement of the cloister was undertaken in the 18th century. In the 19th century, significant makeovers were completed in the building with the clear style of the puritan movement typical of the international practice of the period – the cultural value of architectural complex was recognized by inscription on Unesco World Heritage list in 1996. Today, after one century, the community, the Benedictine teaching order needs new spaces for the spatial expression of their contemporary spiritual life. The architect of these makeovers is the Englishman John Pawson, whose minimalism stands close to the conception of the monks both in style and in the reduced formal world. Beside the problems like the debates arising from the concepts which intend to end several attributes, or the resistance of professionals who fear for the art heritage only little attention is paid to the spiritual need of the users of the building which searches for its right place along the spiritual references of the reformation movements started in the 1920ies. During two years of recontruction and restoration works a brand new sacral space has been established in the existing historical spatial structure. The font in the west door, the altar in the middle, the lectern and the circular window on the east end is reconizable of the use of same material, the white onyx. Meanwhile, at the foot of the abbey-hill a pilgrimage house was established by Hungarian architect Tamás Czigány, and it was completed with a small chapel by the little path running to the forest: the wooden timber beams were built on each other by the hand of people searching for the truth; the walls emerged slowly but with the joy of work, the building elements formed a space with making a roof and in the middle of the square space, under the 3x3 divisions of the ceiling a modest altar table was created from the same material. It seems that beside the famous plans a statement was done in silence, which statement forms the contemporary spatial needs of the community made up of people. Our lecture analyses the two different contemporary space-interpretations originating in the history of the same place, in relation of soul, community and space.
CitationZorán, Vukoszávlyev; Erzsébet, Urbán. Community and space : the interpretation of a community space located at an ancient sacral place. A: XXXVIIè Curset jornades internacionals sobre la intervenció en el patrimoni arquitectònic. "Patrimoni sacre: permanent innovació". Barcelona: AADIPA; COAC, 2014, p. 1-6.
URIhttp://hdl.handle.net/2099/16381
Collections
Share: