Reuse of deconsecrated churches: the case of Pavia 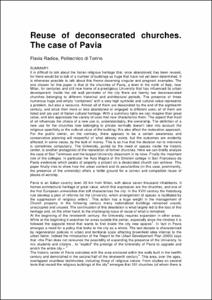 It is difficult to talk about the Italian religious heritage that, once abandoned, has been reused, for there would be to talk of a number of buildings so huge that have not yet been determined. It is otherwise possible to talk about this theme observing singular and pregnant examples. The one chosen for this paper is that of the churches of Pavia, a town in the north of Italy, near Milan, for centuries an still now home of a prestigious University that has influenced its urban development. Inside the old wall perimeter of the city, there are more than twenty deconsecrated churches belonging to different historical and architectural periods. The presence of these numerous huge and empty “containers” with a very high symbolic and cultural value represents a problem, but also a resource. A firstly historical premise allows to comprehend the different processes of dismission that have affected this heritage, and basically the reasons of the present day situation. With an urban scale approach, we can investigate the context that has decisively affected the destiny of these buildings. By observing the conversion of old churches we can speculate on a certain number of aspects: how the conversions were managed; which policies were followed; how culture influenced concrete choices; who (which institution) suggested the restoration; what theories guided it; to what extent did the economic interests and search for spaces prevail over the preservation ideals. The architectural outcomes found in this wide palimpsest are varied, especially due to the financial availability of new owners. There appears to be, in most cases, a certain awareness and conservative planning will respectful of what already exists. At the same time, there are several instances of churches that are neglected, reduced to residential or incompatible uses, and faced with serious problems not only ethical but also cultural. This paper will show how the urban context and its peculiarities (in this case, prominently, the presence of the university) offers a fertile ground for a correct and compatible reuse of places of worship
CitationRadice, Flavia. Reuse of deconsecrated churches: the case of Pavia. A: XXXVIIè Curset jornades internacionals sobre la intervenció en el patrimoni arquitectònic. "Patrimoni sacre: permanent innovació". Barcelona: AADIPA; COAC, 2014, p. 1-4.
URIhttp://hdl.handle.net/2099/16378