The house church as a preservation challenge : heritage issues raised by the work of Marc Dessauvage between 1959 and 1974 in the Archbishopric Mechlin-Brussels 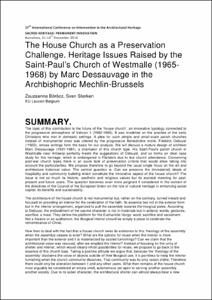 The progressive atmosphere surrounding Vatican II, with its emphasis on liturgical renewal and community participation, gave a boost to typological renewal in Roman Catholic church architecture. One popular new type was the so called ‘house church’. Inspired by the early Christians who, to avoid prosecution, met in domestic settings, the house church paradigm became synonym with values such as simplicity, proximity, authenticity. In Belgium, the champion of this new church type was Marc Dessauvage (1931-1981). During his short career, he built a substantial body of churches and monastic buildings thanks to the active support from the Archbishopric Mechlin-Brussels and Frederic Debuyst, who extensively commented on Dessauvage’s work in his widespread magazine Art d’Eglise. In retrospect, his work can be said to have made an important contribution to the renewal of church architecture, in the sense that it testifies to an active search for spiritual and social renewal in religious practice, involving clerics and laity alike. However, today, with church attendance reaching historically low figures in Belgium, many churches are becoming redundant. The question of their future use is a delicate topic that forms the subject of much debate within political, architectural and clerical circles. Whereas most historical church buildings are listed, or are at least recognized for their art historical or urban significance, this is not the case for the (non-monumental) post-war (house) churches. Despite their relatively young age, the lack of monumentality and clear sacral identity, the use of experimental (and often cheap) building materials and their often peripheral location pose a severe threat to this part of modern architectural heritage. Dessauvage’s work offers a clear instance: in recent years, several of his churches have been converted, sold or clumsily restored. One church is even threatened with demolition at the moment of writing. Given the lack of preservation criteria enabling to discuss, let alone to take into account the particularities of the post-war religious patrimony, this paper proposes to develop a critical framework that goes beyond the single focus on the art/architectural historical value of church buildings. As it will be argued, the patrimonial value of the house churches of the 1960s, in particular, lies perhaps not primarily in their material qualities but in their communal and liturgical significance as spaces for spiritual and social encounter. Discussing the heritage qualities of such buildings thus necessarily raises the question of how to deal with the spatial and atmospheric qualities of their interior rather than their exterior appearance. The central question thus becomes: how can we preserve the (immaterial) ideals of hospitality and community building which constitute the innovative aspect of much post war church architecture? In line with the recent Council of the European Union’s directives regarding the role of cultural heritage in creating and enhancing social capital, we therefore propose to investigate how Dessauvage’s house churches can take up a broader social role that might safeguard their future.1 In doing so, we will build upon earlier research with regards to critical value assessment of 20th-century church buildings in Flanders, and archival research undertaken as part of an exhibition on Dessauvage’s church buildings, currently under preparation.
CitationBöröcz, Zsuzsanna; Sterken, Sven. The house church as a preservation challenge : heritage issues raised by the work of Marc Dessauvage between 1959 and 1974 in the Archbishopric Mechlin-Brussels. A: XXXVIIè Curset jornades internacionales sobre la intervenció en el patrimoni arquitectònic. "Patrimoni sacre: permanent innovació". Barcelona: AADIPA; COAC, 2014, p. 1-5.
Award-winningAward-winning
URIhttp://hdl.handle.net/2099/16372