Permanence of roman toponyms in the middle ages: Castrum Corzani and the first settlement of S. Piero in Bagno, Forum corzani 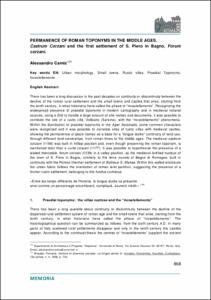 Except where otherwise noted, content on this work is licensed under a Creative Commons license : Attribution-NonCommercial-NoDerivs 3.0 Spain
Abstract
There has been a long discussion in the past decades on continuity or discontinuity between the decline of the roman rural settlement and the small towns and castles that arise, starting from the tenth century, in what historians have called the phase of “incastellamento”. Recognizing the widespread presence of praedial toponyms in modern cartography and in medieval notarial sources, using a GIS to handle a large amount of site names and documents, it was possible to correlate the site of a rustic villa, Valbiano (Sarsina), with the “incastellamento” phenomena. Within the distribution of praedial toponyms in the Ager Sarsinatis, some common characters were recognized and it was possible to correlate sites of rustic villas with medieval castles, showing the permanence of place names as a base for a “longue durèe” continuity of land use, through different land ownerships, from roman times to the middle ages. The medieval castrum corzani (1199) was built in hilltop position and, even though preserving the roman toponym, is mentioned later than a curte corçani (1177). It was possible to hypothesize the presence of a walled mercatale, forum corzani (1239) in a valley position, as the medieval fortified nucleus of the town of S. Piero in Bagno, similarly to the terra murata of Bagno di Romagna, built in continuity with the Roman thermal settlement of Balneus S. Mariae. Within this walled enclosure the urban fabric follows the orientation of roman land partition, suggesting the presence of a former rustic settlement, belonging to the fundus curtianus.
CitationCamiz, Alessandro. Permanence of roman toponyms in the middle ages: Castrum Corzani and the first settlement of S. Piero in Bagno, Forum corzani. A: International Conference Virtual City and Territory. "9° Congresso Città e Territorio Virtuale, Roma, 2, 3 e 4 ottobre 2013". Roma: Università degli Studi Roma Tre, 2014, p. 868-886.
URIhttp://hdl.handle.net/2099/16312
DOI10.5821/ctv.7960
ISBN978-88-97524-15-1
Collections
Share: