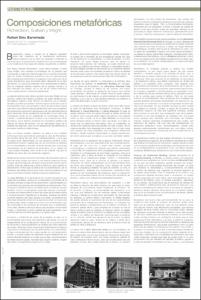 Except where otherwise noted, content on this work is licensed under a Creative Commons license : Attribution-NonCommercial-NoDerivs 3.0 Spain
Abstract
Aunque brevemente, y aunque ya ha sido señalada anteriormente, vamos a insistir en la relación existente entre tres maestros de la arquitectura americana, ya que ciertos aspectos de su obra nos ayudarán a entender una conexión entre el pensamiento arquitectónico y lo que llamamos artesanía, pues introducen en sus edificios la reflexión sobre la manipulación de la materia como metáfora formal capaz de configurar visualmente un edificio.We insist on the relationship between three Masters of American architecture. Certain aspects of his work help us to understand the importance in the architectural thought of materiality as a formal metaphor capable of introducing visual order to a building. The relationship between the latter two is well known. Wright, in his writings, described Sullivan as a master, from who inherited the use of the word organic. But, to a large extent, organic refers to a formal quality that made Sullivan appreciated the work of Richardson above his other contemporaries, and which the author himself would call, in his few writings, as living architecture: one that without being monotonous stands out for its tranquility and simplicity. Sullivan perceives that the main characteristic of the buildings of Richardson is their unity. Is to this complex unity, as that of a living being, that the other two refer to with the term organic. Richardson was very subtle formally. At the Marshall Field building, classical tripartition (beginning, development and end) is resolved with a very complex modulation, which creates subtle visual tensions that link parts among themselves, not only by position but by also by affinity. The building, thanks to his series of horizontal bands, is three and four, and their different groupings and intersections, which creates vertical stresses that unify it. What in Richardson is accomplished by the tension between elements, at Sullivan is reduced to the continuity of all elements, which are nothing more than one, tour around by a plant line that twists on itself. It is the metaphor as an visual image. Wright picks up the formal model of the libraries of Richardson, and reformulates the principle that governs them. A building, to have unity, rather than the pure physical continuity, needs to establish a law that links different parts. That is the beginning of his famous “breaking” the box, the classical building as a single volume. He establishes a system of verticals and horizontals, whose unity is not secured by the establishment of precise limits but because they criss-cross and their complementary nature. If those lines, in Richardson, are strains of a composition sculpted on a solid, which prompted Sullivan to identify unity with the own solid and its limits, at Wright these lines become volumetric elements governed by a compositional law, not abstract but metaphorical. The organic is no longer applied motiv, ornament, but constructed metaphor.
CitationDíez Barreñada, Rafael. Composiciones metafóricas: Richardson, Sullivan y Wright. A: "Palimpsesto", Març 2015, núm. 12, p. 10-11
URIhttp://hdl.handle.net/2099/16258
DOI10.5821/palimpsesto.12.3926
DLB. 7929-2013
ISSN2014-9751
Collections
Share: