Care of the territory and seismic events: searching for place identity resilience in post-earthquake reconstruction 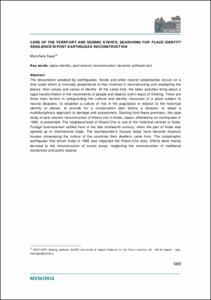 The devastation wreaked by earthquakes, floods and other natural catastrophes occurs on a time scale which is inversely proportional to that involved in reconstructing and readapting the places, their values and sense of identity. At the same time, the latter activities bring about a rapid transformation in the movements of people and objects and in ways of thinking. There are three main factors in safeguarding the cultural and identity resources of a place subject to natural disasters: to establish a culture of risk in the population in relation to the historical identity of places; to provide for a conservation plan before a disaster; to adopt a multidisciplinary approach to damage and assessment. Starting from these premises, the case study of post seismic reconstruction of Kitano-cho in Kobe, Japan, affected by an earthquake in 1995, is presented. The neighbourhood of Kitano-Cho is one of the historical centres of Kobe. Foreign businessmen settled here in the late nineteenth century, when the port of Kobe was opened up to international trade. The businessmen’s houses today have become museum houses showcasing the culture of the countries their dwellers came from. The catastrophic earthquake that struck Kobe in 1995 also impacted the Kitano-Cho area. Efforts were mainly devoted to the reconstruction of tourist areas, neglecting the reconstruction of traditional residences and public spaces.
CitationSepe, Marichela. Care of the territory and seismic events: searching for place identity resilience in post-earthquake reconstruction. A: International Conference Virtual City and Territory. "9° Congresso Città e Territorio Virtuale, Roma, 2, 3 e 4 ottobre 2013". Roma: Università degli Studi Roma Tre, 2014, p. 689-701.
URIhttp://hdl.handle.net/2099/16238
ISBN978-88-97524-15-1