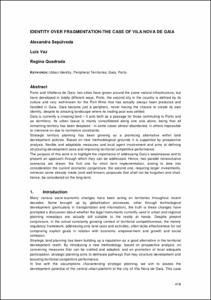 Show full item record
Sepúlveda, Alexandra
Vaz, Luís
Quadrada, Regina
Document typeConference report
PublisherUniversità degli Studi Roma Tre
Centre de Política de Sòl i Valoracions
Rights accessOpen Access
Abstract
Porto and VilaNova de Gaia: two cities have grown around the same natural infrastructure, but have developed in totally different ways. Porto, the second city in the country is defined by its culture and very well-known for the Port Wine that has actually always been produced and handled in Gaia. Gaia became just a periphery, never having the chance to create its own identity, despite its amazing landscape where its trading post was settled. Gaia is currently a crossing land – it acts both as a passage for those commuting to Porto and as dormitory. Its urban tissue is mainly consolidated along one axis alone, being that all remaining territory has been despised - in some cases almost abandoned, in others impossible to intervene on due to normative constraints. Strategic territory planning has been growing as a promising alternative within land development policies. Based on new methodological grounds it is supported by prospective analysis, flexible and adaptable measures and local agent involvement and aims at defining structuring development axes and improving territorial competitive performance. The purpose of this work is to highlight the importance of addressing Gaia’s weaknesses and to present an approach through which they can be addressed. Hence, two parallel nonexclusive scenarios are drawn: the first one for short term implementation, aiming to take into consideration the current economic conjuncture; the second one, requiring larger investments, retrieves some already made (and well-known) proposals that shall not be forgotten and shall, hence, be considered on the long-term.
CitationSepúlveda, Alexandra; Vaz, Luís; Quadrada, Regina. Identity over fragmentation:the case of Vila Nova de Gaia. A: International Conference Virtual City and Territory. "9° Congresso Città e Territorio Virtuale, Roma, 2, 3 e 4 ottobre 2013". Roma: Università degli Studi Roma Tre, 2014, p. 418-449.
URIhttp://hdl.handle.net/2099/16205
DOI10.5821/ctv.7963
ISBN978-88-97524-15-1
Collections
Share: