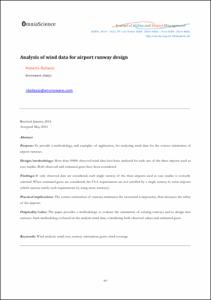 Show full item record
Bellasio, Roberto
Document typeArticle
PublisherEscola Tècnica Superior d'Enginyeries Industrial i Aeronàutica de Terrassa. Universitat Politècnica de Catalunya
Rights accessOpen Access
Abstract
Purpose: To provide a methodology, and examples of application, for analyzing wind data for the correct orientation of airport runways. Design/methodology: More than 90000 observed wind data have been analyzed for each one of the three airports used as case studies. Both observed and estimated gusts have been considered. Findings: If only observed data are considered, each single runway of the three airports used as case studies is correctly oriented. When estimated gusts are considered, the FAA requirements are not satisfied by a single runway in some airports (which anyway satisfy such requirements by using more runways). Practical implications: The correct orientation of runways minimizes the crosswind components, then increases the safety of the airports. Originality/value: The paper provides a methodology to evaluate the orientation of existing runways and to design new runways. Such methodology is based on the analysis wind data, considering both observed values and estimated gusts.
CitationBellasio, Roberto. Analysis of wind data for airport runway design. "Journal of Airline and Airport Management", 2014, vol. 4, núm. 2, p. 97-116.
URIhttp://hdl.handle.net/2099/16095
ISSN2014-4806
Collections
Share: