Academic performance of students admitted with different entry certificates to the nigerian certificate in education programme at the Federal College of Education (Technical), Omoku 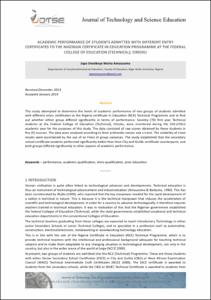 Show full item record
Amasuomo, Japo Oweikeye Morto
Document typeArticle
PublisherUniversitat Politècnica de Catalunya. Institut de Ciències de l'Educació
Rights accessOpen Access
Abstract
This study attempted to determine the levels of academic performance of two groups of students admitted with different entry certificates to the Nigeria certificate in Education (NCE) Technical Programme and to find out whether either group differed significantly in terms of performance. Seventy (70) first year Technical students at the Federal College of Education (Technical), Omoku, were monitored during the 2011/2012 academic year for the purposes of this study. The data consisted of raw scores obtained by these students in five (5) courses. The data were analysed according to their arithmetic means and a t-test. The reliability of t-test results were ascertained by the use of an f-test of group variances. The study established that the secondary school certificate students performed significantly better than their City and Guilds certificate counterparts, and both groups differed significantly in other aspects of academic performance
CitationAmasuomo, Japo Oweikeye Morto. Academic performance of students admitted with different entry certificates to the nigerian certificate in education programme at the Federal College of Education (Technical), Omoku. "JOTSE: Journal of Technology and Science Education", Marzo 2014, vol. 4, núm. 1, p. 39-47.
URIhttp://hdl.handle.net/2099/16066
DOI10.3926/jotse.107
DLB-2000-2012
ISSN2013-6374
2014-5349
Collections
Share: