Redefinition of territorial scales and spatial planning in Denmark 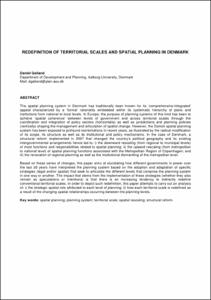 Show full item record
Galland, Daniel
Document typeConference report
PublisherDepartament d’Urbanisme i Ordenació del Territori. Universitat Politècnica de Catalunya
Maestría en Planeación Urbana y Regional. Pontificia Universidad Javeriana de Bogotá
Rights accessOpen Access
Abstract
The spatial planning system in Denmark has traditionally been known for its ‘comprehensive-integrated’ appeal characterized by a ‘formal’ rationality embedded within its systematic hierarchy of plans and institutions from national to local levels. In Europe, the purpose of planning systems of this kind has been to achieve ‘spatial coherence’ between levels of government and across territorial scales through the coordination and integration of policy sectors (horizontally) as well as jurisdictions and planning policies (vertically) shaping the management and articulation of spatial change. However, the Danish spatial planning system has been exposed to profound reorientations in recent years, as illustrated by the radical modification of its scope, its structure as well as its institutional and policy mechanisms. In the case of Denmark, a structural reform implemented in 2007 that changed the country’s political geography and its existing intergovernmental arrangements hence led to: i) the downward rescaling (from regional to municipal levels) of most functions and responsibilities related to spatial planning; ii) the upward rescaling (from metropolitan to national level) of spatial planning functions associated with the Metropolitan Region of Copenhagen; and iii) the revocation of regional planning as well as the institutional dismantling of the metropolitan level. Based on these series of changes, this paper aims at elucidating how different governments in power over the last 20 years have interpreted the planning system based on the adoption and adaptation of specific strategies (legal and/or spatial) that seek to articulate the different levels that comprise the planning system in one way or another. The impact that stems from the implementation of these strategies (whether they also remain as speculations or intentions) is that there is an increasing tendency to indirectly redefine conventional territorial scales. In order to depict such redefinition, this paper attempts to carry out an analysis of: i) the strategic spatial role attributed to each level of planning; ii) how each territorial scale is redefined as a result of the changing spatial relationships occurring between the planning levels.
CitationGalland, Daniel. Redefinition of territorial scales and spatial planning in Denmark. A: Seminario Internacional de Investigación en Urbanismo. "VI Seminario Internacional de Investigación en Urbanismo, Barcelona-Bogotá, junio 2014". Barcelona: DUOT, 2014.
URIhttp://hdl.handle.net/2099/16058
DOI10.5821/siiu.6002
DLB-15.590-2013
ISSN2339-6598
Collections
Share: