The code of manzana: invariability, simplicity and changeability 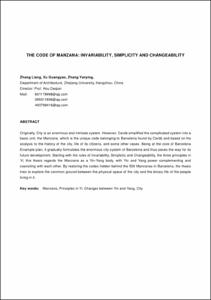 Originally, City is an enormous and intricate system. However, Cerdá simplified the complicated system into a basic unit, the Manzana, which is the unique code belonging to Barcelona found by Cerdá and based on his analysis to the history of the city, life of its citizens, and some other cases. Being at the core of Barcelona Eixample plan, it gradually formulates the enormous city system of Barcelona and thus paves the way for its future development. Starting with the rules of Invariability, Simplicity and Changeability, the three principles in Yi, this thesis regards the Manzana as a Yin-Yang body, with Yin and Yang power complementing and coexisting with each other. By restoring the codes hidden behind the 550 Manzanas in Barcelona, the thesis tries to explore the common ground between the physical space of the city and the binary life of the people living in it.
CitationLiang, Zhang; Guangyao, Xu; Yanying, Zhang. The code of manzana: invariability, simplicity and changeability. A: Seminario Internacional de Investigación en Urbanismo. "VI Seminario Internacional de Investigación en Urbanismo, Barcelona-Bogotá, junio 2014". Barcelona: DUOT, 2014.
URIhttp://hdl.handle.net/2099/16047
DLB-15.590-2013
ISSN2339-6598