Characterization of cyclical phases in the manufacturing industry in Spain 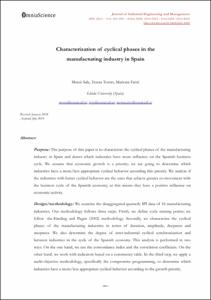 Except where otherwise noted, content on this work is licensed under a Creative Commons license : Attribution-NonCommercial 3.0 Spain
Abstract
Purpose: The purpose of this paper is to characterize the cyclical phases of the manufacturing industry in Spain and detect which industries have more influence on the Spanish business cycle. We assume that economic growth is a priority; we are going to determine which industries have a more/less appropriate cyclical behavior according this priority. We analyze if the industries with better cyclical behavior are the ones that achieve greater co-movement with the business cycle of the Spanish economy, as this means they have a positive influence on economic activity. Design/methodology/approach: We examine the disaggregated quarterly IPI data of 16 manufacturing industries. Our methodology follows three steps. Firstly, we define cycle turning points; we follow the Harding and Pagan (2002) methodology. Secondly, we characterize the cyclical phases of the manufacturing industries in terms of duration, amplitude, deepness and steepness. We also determine the degree of inter-industrial cyclical synchronization and between industries in the cycle of the Spanish economy. This analysis is performed in two ways. On the one hand, we use the concordance index and the correlation coefficient. On the other hand, we work with indicators based on a consistency table. In the Third step, we apply a multi-objective methodology, specifically the compromise programming, to determine which industries have a more/less appropriate cyclical behavior according to the growth priority. Findings and Originality/value: The business cycle of the Spanish economy is positively influenced by high- and medium-tech industries, which have demonstrated their competitive capacity in international markets, and by medium- low-tech industries, with major strengths in R&D, and in survival and consolidation strategies. These results enable manufacturing industries to exert a positive effect on the business cycle that is weakened because many of them show a high correlation between employment and cyclical fluctuations. Originality/value: The study is original and useful on various levels. Firstly, the study of sectoral cycles makes it possible to identify common trends in the growth of business activities and to see the interdependence of fluctuations. Secondly, it will be easy to deduce which sectoral disruptions generate the greatest impact on economic activity. Finally, because the analysis of the manufacturing industry cycle has not yet carried out
CitationSala, Mercè; Torres, Teresa; Farré, Mariona. Characterization of cyclical phases in the manufacturing industry in Spain. "Journal of Industrial Engineering and Management", Octubre 2014, vol. 7, núm. 4, p. 961-994.
URIhttp://hdl.handle.net/2099/15543
DLB-28744-2008
ISSN2013-0953
Collections
Share: