Geography and the built environment: spatial trends in urban growth induced by a core-periphery model 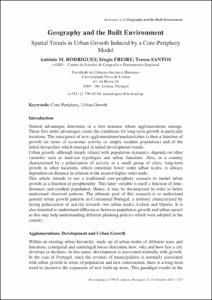 This article intends to use a traditional core-periphery scenario to model urban growth as a function of peripherality. This latter variable is itself a function of timedistances and resident population. Hence, it may be decomposed in order to better understand observed patterns. The ultimate goal of this research is to understand general urban growth patterns in Continental Portugal, a territory characterized by strong polarization of activity towards two urban nodes, Lisbon and Oporto. It is also intended to understand differences between population growth and urban sprawl as this may help understanding different planning policies which were adopted in the country.
CitationRodrigues, António M.; Freire, Sérgio; Santos, Teresa. Geography and the built environment: spatial trends in urban growth induced by a core-periphery model. A: Virtual cities and territories. "International Conference Virtual City and Territory (7è: 2011: Lisboa)". Coimbra: University of Coimbra. Department of Civil Engineering; etc., 2011, p. 157-160.
URIhttp://hdl.handle.net/2099/15533
ISBN978-972-96524-6-2
978-989-97510-0-2