Virtual or real megaregions?: the case of linear metropolitan system in northern Italy 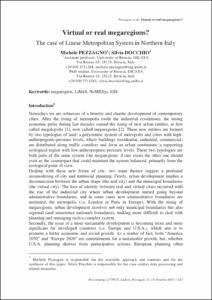 Show full item record
Pezzagno, Michèle
Docchio, Silvia
Document typeConference report
PublisherDepartment of Civil Engineering of the University of Coimbra and e-GEO, Research Center in Geography and Regional Planning of the Faculty of Social Sciences and Humanities of the Nova University of Lisbon
Rights accessOpen Access

Nowadays we are witnesses of a frenetic and chaotic development of contemporary cities. After the rising of metropolis (with the industrial revolution), the strong economic pulse during last decades caused the rising of new urban entities, at first called megalopolis, now called megaregions. These new entities are formed by two typologies of land: a polycentric system of metropolis and cities with highanthropogenic-pressure levels, where buildings (residential, industrial, commercial) are distributed along traffic corridors and form an urban continuum; a supporting ecological region with low-anthropogenic-pressure levels. These two typologies are both parts of the same system (the megaregion): if one exists the other one should exist as the counterpart that could maintain the system balanced, primarily from the ecological point of view.
CitationPezzagno, Michèle; Docchio, Silvia. Virtual or real megaregions?: the case of linear metropolitan system in northern Italy. A: Virtual cities and territories. "International Conference Virtual City and Territory (7è: 2011: Lisboa)". Coimbra: University of Coimbra. Department of Civil Engineering; etc., 2011, p. 147-150.
URIhttp://hdl.handle.net/2099/15531
ISBN978-972-96524-6-2
978-989-97510-0-2