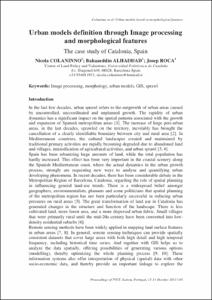 Document typeConference report
PublisherDepartment of Civil Engineering of the University of Coimbra and e-GEO, Research Center in Geography and Regional Planning of the Faculty of Social Sciences and Humanities of the Nova University of Lisbon
Rights accessOpen Access

In the last few decades, urban sprawl refers to the outgrowth of urban areas caused by uncontrolled, uncoordinated and unplanned growth. The rapidity of urban dynamics has a significant impact on the spatial patterns associated with the growth and expansion of Spanish metropolitan areas. The increase of large peri-urban areas, in the last decades, sprawled on the territory, inevitably has brought the cancellation of a clearly identifiable boundary between city and rural area. In Mediterranean countries, the cultural landscapes created and maintained by traditional primary activities are rapidly becoming degraded due to abandoned land and villages, intensification of agricultural activities, and urban sprawl .
CitationColaninno, Nicolas; Alhaddad, Bahaaeddin; Roca Cladera, Josep. Urban models definition through image processing and morphological features: the case study of Catalonia, Spain. A: Virtual cities and territories. "International Conference Virtual City and Territory (7è: 2011: Lisboa)". Coimbra: University of Coimbra. Department of Civil Engineering; etc., 2011, p. 85-88.
URIhttp://hdl.handle.net/2099/15464
ISBN978-972-96524-6-2
978-989-97510-0-2