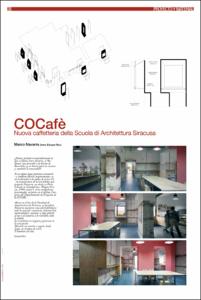 Document typeArticle
PublisherCátedra Blanca de Barcelona
Rights accessOpen Access
Abstract
Have we irreparably lost what was called among us the “Realisme” that preceded the Escola de Barcelona, and largely held and also transcended?. If somewhere we can take it up again - and it is urgent to do so-is in the attention on the steps of the Lo-Fi, the architecture of the low fidelity proposed by Navarra in his Parco Lineale in Catalgirone, Magna Grecia, 1999, that he presented together with other colleagues at the last Conference of the Department of Architectural Projects of ETSAB. Now in the bar of the School of Architecture of Syracuse, Navarra maintains high fidelity to all the essentials -sequence, construction, materiality, texture-, and leaves everything else open the use and the user, to the variable. It is economical in spending and generous in conception. It shows a way to go, of course, in times of crisis.
CitationNavarra, Marco, Bru Bistuer, Eduard. COCafè: nuova caffetteria della Scuola di Architettura Siracusa. A: "Palimpsesto", Juny 2014, núm. 10, p. 8-9
URIhttp://hdl.handle.net/2099/14962
DOI10.5821/palimpsesto.10.3653
DLB. 7929-2013
ISSN2014-9751
Collections
Share: