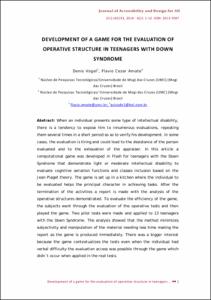 Show full item record
Amate, Flávio Cezar
Vogel, Denis
Document typeArticle
PublisherCàtedra d'Accessibilitat (CATAC)
Rights accessOpen Access
All rights reserved. This work is protected by the corresponding intellectual and industrial property rights. Without prejudice to any existing legal exemptions, reproduction, distribution, public communication or transformation of this work are prohibited without permission of the copyright holder
Abstract
When an individual presents some type of intellectual disability, there is a tendency to expose him to innumerous evaluations, repeating them several times in a short period so as to verify his development. In some cases, the evaluation is tiring and could lead to the desistance of the person evaluated and to the exhaustion of the appraiser. In this article a computational game was developed in Flash for teenagers with the Down Syndrome that demonstrate light or moderate intellectual disability to evaluate cognitive seriation functions and classes inclusion based on the Jean Piaget theory. The game is set up in a kitchen where the individual to be evaluated helps the principal character in achieving tasks. After the termination of the activities a report is made with the analysis of the operative structures demonstrated. To evaluate the efficiency of the game, the subjects went through the evaluation of the operative tests and then played the game. Two pilot tests were made and applied to 13 teenagers with the Down Syndrome. The analysis showed that the method minimizes subjectivity and manipulation of the material needing less time making the report as the game is produced immediately. There was a bigger interest because the game contextualizes the tests even when the individual had verbal difficulty the evaluation access was possible through the game which didn ́t occur when applied in the real tests.
CitationAmate, Flávio Cezar; Vogel, Denis. Development of a game for the evaluation of operative structure in teenagers with Down Syndrome. "Journal of accessibility and design for all", 2014, vol. 4, núm. 1, p. 1-13.
URIhttp://hdl.handle.net/2099/14800
ISSN2013-7087
Collections
Share: