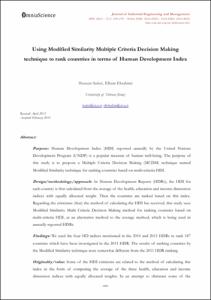 Show full item record
Safari, Hossein
Ebrahimi, Elham
Document typeArticle
PublisherOmniaScience
Rights accessOpen Access
Abstract
Purpose:Human Development Index (HDI) reported annually by the United Nations Development Program (UNDP) is apopular measure of human well-being. The purposeof this study is to propose a Multiple Criteria Decision Making (MCDM) technique named Modified Similarity technique for ranking countries based on multi criteria HDI. Design/methodology/approach:In Human Development Reports (HDRs), the HDI for each country isfirst calculated from the average of the health, education and income dimension indices with equally allocatedweight. Then the countries are ranked based on this index. Regarding the criticisms the method ofcalculating the HDI has received, this study usesModified Similarity Multi Criteria Decision Making methodfor ranking countries based on multi criteriaHDI, as an alternative method to the average method, which is being used in annually reported HDRs. Findings: We used the four HD indices mentioned in the 2010 and 2011 HDRs to rank 187 countries which have been investigated in the 2011 HDR. The results of ranking countries by the Modified Similarity technique were somewhat different from the 2011 HDR ranking. Originality/value:Some of the HDI criticisms are related to the method of calculating the index in the form of computing theaverage of the three health, education and income dimension indices with equally allocated weight. in an attempt to eliminatesome of the weaknesses associated with the index, this study uses Similarity technique, as an alternative to the average method of ranking countries in terms of humandevelopment. In addition due to some discrepancies associated with the Similarity technique introduced by Deng (2007), a Modified Similarity technique is discussed.
CitationSafari, Hossein; Ebrahimi, Elham. Using Modified Similarity Multiple criteria Decision Making technique to rank countries in terms of Human Development Index. "Journal of Industrial Engineering and Management", Abril 2014, vol. 7, núm. 1, p. 254-275.
URIhttp://hdl.handle.net/2099/14510
DLB-28744-2008
ISSN2013-0953
Collections
Share: