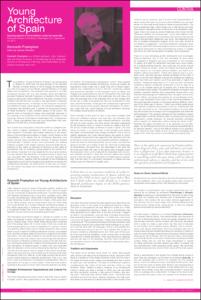 The exhibition “Young Architects of Spain” was inaugurated in Madrid in 2008 with the sponsorship of the Spanish Ministry of Public Works. In 2010 it began its international tour with the support of the AECID, Spanish Ministry of Foreign Affairs and Cooperation. The exhibition has opened in 18 cities throughout Europe, the U.S. and Canada. Since the selection process Professor Kenneth Frampton, a member of the international jury along with Juhani Pallasmaa, has been involved in this initiative that had the aim to make a new generation of Spanish architects better known, “A Window to the Unknown” as named by exhibition Curator Jesús Aparicio. An extensive catalogue accompanies the exhibition and, in addition to showing the works of these architects, it also contains essays of the jurors. The general lines of Frampton’s essay were publically exposed in the opening of the exhibition at the central headquarters of the American Institute of Architects in Washington DC, in September 2011. These unpublished lines are now transcribed, and published for the first time, in this publication.