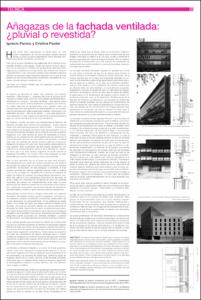 Except where otherwise noted, content on this work is licensed under a Creative Commons license : Attribution-NonCommercial-NoDerivs 3.0 Spain
Abstract
The double skin facade system, known in english-speaking countries as “rain screen”, has been imported to our country under the term “ventilated facade”. Maybe in order to assert the possibility that the ventilation of condensation inside the cavity might benefit summer comfort in our climate. This insistence in ventilation has caused a serious confusion regarding the role of the cavity. Its original purpose was to prevent water from passing through, but its popularity, due to the liberty of exterior finishing, is blurring that original role. Consequently, the prevention of water passing through to the interior is often not guaranteed. The purpose of these lines is to make evident that what we know today as “ventilated facade” includes double skin facade systems where the role of the air gap is diverse; and, in an attempt to bring order to this reality, we suggest to make a distinction between: rain screen, ventilated facade and facade cladding.
CitationParicio Ansuategui, Ignacio, Pardal March, Cristina. Añagazas de la fachada ventilada: ¿pluvial o revestida?. A: "Palimpsesto", Febrer 2014, núm. 09, p. 5
URIhttp://hdl.handle.net/2099/14395
DOI10.5821/palimpsesto.09.2811
DLB. 7929-2013
ISSN2014-9751
Collections
Share: